The girls are 21 today! Can’t believe it! Time to invite all their friends over, break out the yard glass and party!

Oh…hang on, Lara just reminded me it’s 21 days, not years…that makes sense, I mean a yard of beer would weigh more than them so it would be a little ambitious to have them drink it now.There would probably be a lot of spillage. But I digress.

Today’s update is all about breathing (and multitasking). There are a number of devices they use for breathing assistance. The device that gives the most assistance is the ventilator, essentially breathes for them if they don’t. The problem is that it can cause inflammation and also doesn’t allow the lungs to develop, precisely because it is doing the breathing for them. Stepping down from that is the NAVA, then the CPAP, then the Vapotherm, then they are taken off everything. The NAVA and CPAP have rugby-like helmets with tubes sticking out. Katarina went from the ventilator to CPAP, back to the ventilator, back to the CPAP and is now on the NAVA. Since each of these comes with a different hat I think she just wants to try them all out. Natasha started on CPAP, moved to the ventilator, back to the CPAP…might of gone back on ventilator at some point…can’t quite remember…but is currently on the Vapotherm and the thing we like about that is we can finally see her face!

Katarina put on a growth spurt over last weekend increasing from <700g to 900g, hitting the 2lb mark before dropping back. She did this while she was on the ventilator which, since it was providing all her breathing requirements, allowed her to direct her calorific intake to growth. She has been on the CPAP and NAVA all week and so has not been putting any weight on until today when she hit a new record of 930g (2lb, 1oz). Yay!. Her breathing is getting better slowly and so probably all the calorific intake is going into the effort of breathing. And waving her arms and legs around which she does whenever she can. She has been described as the “feisty” one. Words like “angry” and “full of piss and vinegar” have also been thrown around in descriptions of her. We’ve asked the nursing staff to make sure they get all that out of her before sending her home. They just laugh and tell me that’s not gonna happen.

Natasha is growing, up to ~1200g (2lb, 10oz) and is on the Vapotherm so is breathing well and definitely looking more filled out.  We get to hold her every day now and she likes it, falling asleep on whichever parent is handy. She will likely come home before Katarina at this rate, but that will still likely be around last week of July/first week of August as that is their full (40 week) term date.

They are both taking to their feeds. Natasha occasionally has rapid decreases in heart rate, normally it is ~170bpm but will drop less than 100 for a couple of seconds. This was obviously startling at first but then we noticed it was while she was doing something else, like taking a dump. Apparently at this point when they try to do too much at once (breathe, keep heart going, take a dump) they can “forget” to keep their heart pumping. It sounds strange but it’s sorta cute – while she is mid-dump her little face goes red, she has a look of extreme concentration and her heart rate drops. Then a couple of seconds later everything is back to normal. We hope she learns to multitask soon though.

Below is a photo of Natasha taken today with my hand for scale. We haven’t really got a good photo of Katarina yet – basically we want to wait until she is free of all medical-rugby helmets before posting a photo. 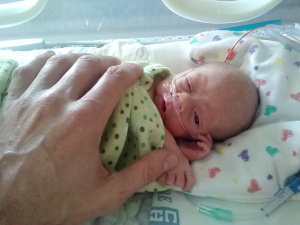 and if you want to see a video of Natasha I posted one on Youtube: http://youtu.be/EXFRZeuveh8 . It’s from yesterday. She hasn’t changed much. There is also a video of Bruno and his keen sense of danger on my channel if you want a laugh.