I got two cards this morning, one from the girls and one from Bruno. Apparently he is feeling like there is a little competition on the horizon so he is starting to send me cards. Don’t worry, we had a talk and I assured him that the girls would not be eating any of his lamb lung and so he was fine. He celebrated by going into what we call “full muppet mode” http://youtu.be/T6Goo7oJUc8).  And I really hope the girls can keep that promise (note to self – put lamb lung treats on shelf…actually, put all dog stuff on shelf….actually, baby proof house…)

The girls are now 5 weeks old and have been making slow and steady progress over the last 5 days. Natasha is now 1.79 kg (3lb, 15oz) and when we went in today she had been removed from all breathing support and was in an open crib! This is huge, she is doing so well (http://youtu.be/kvRAC1Y-KAo). Her lungs and vocal chords have also been tested (http://youtu.be/HfOzOfMWLjY) as has the Natasha silencing system (http://youtu.be/CACZ_Ji_hYg). Katarina is also progressing, still on the Vapotherm but they are lowering the flowrate every couple of days. She is up to 1.36kg (3lb exactly), so pretty much keeping up with her sister in the weight gain department. Since she is now free of all helmets, and since it was fathers day we took a few photos. Like 400MBs worth. Some of them are below. First, Katarina using dad as a deck chair – check out the arms behind the head: 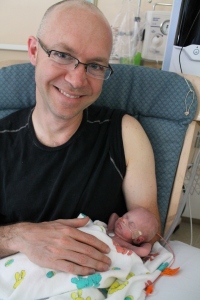 Close up for Katarina: 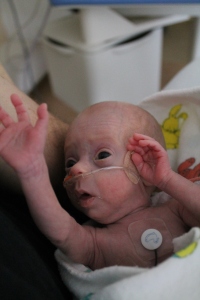 Now that they are heading towards fully handling standard atmospheric temperature and pressure, the next thing is to get the garish orange tubes out of their noses. These are the feeding tubes and necessary because they do not have the skills or endurance to feed from the breast/bottle. Basically, gotta get breath/swallow/suck in the right order. Harder than it sounds. I still have problems. So Natasha has started rigorous training that we were going put into a Rocky-like training montage…but those are really hard to make and it would be made up of Natasha sucking on a finger, then sucking down 5mL of milk, then 10mL, etc..not as compelling as it sounds. Anyway, Natasha is up to the 5mL repeats (once/day) and I think just completed her first. Katarina still has to be weaned off the Vapotherm before she starts.