Wow. Six months since our last post. Even if belated, we first and foremost wish all our friends and family the very best in health and happiness for 2016!  We are surrounded by such wonderful people and our appreciation for them has only grown since the arrival of our dear daughters 2.75 years ago.

Our last few months were rather dominated by two major but very different trips.

We were lucky enough to take a two month sabbatical in breathtaking Canmore, Alberta. It was an incredible experience. And a very physical one with 17 hikes accomplished in total. We were still able to carry the girls in baby carriers/backpacks so the hiking exertion was stepped up thanks to the extra 25 pounds each.  No breaks when you have twins! Lucky for us, they didn’t mind being in the backpacks. And you don’t need bear bells when you are carrying toddlers. For one hike we left Elmo in the car; we, and the surrounding countryside, were serenaded to hours of “Elmo? Elmo? Elmo? Elmo?”. Next hike we absolutely remembered Elmo….and were serenaded to hours of “Elmo red. Elmo red. Elmo red. Elmo red.” I’m sure the bears ran away as fast as they could. We also learned that Kat loves high winds but Tash does not (“Stop wind. Stop wind. Stop wind”).  It was all worth it and we would recommend that everyone add “experiencing fall in the Canadian Rockies” to their bucket list! A few outdoorsy highlights: a night at Emerald Lake, the 13 mile trek to see the Burgess Shale fossils, Quarry Lake in Canmore town proper, and the larches at Highwood Pass.

Just another day in the Canadian Rockies: 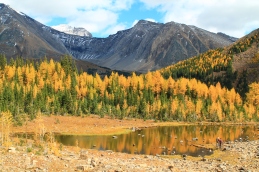 I will add that we purposefully got back to Seattle in time to enjoy Halloween. The girls went with astronaut and Cookie Monster. Sort of funny as neither of them had much interest in cookies…until Christmas when they discovered the joys of gingerbread cookies…which has changed EVERYTHING. A whole new world.  We also did the now annual pumpkin patch. This is far more of a hit than trick or treating, which is just confusing to Kat and downright alarming to Tasha. 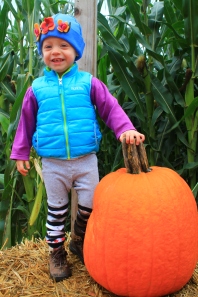 This year, bringing a Christmas tree INSIDE the house was mind blowing for the girls. They patted and hugged it and talked about the tree having enough water. They also tore off every ornament within reach. And then, before we knew it, we were back in travel mode headed to Toronto to spend Christmas with the whole family. So lovely! We had a full ten days to spend with Grandma and Grandpa Diener, as well as Aunt Vinaya, Uncle Anton and BABY ND!  The girls were really excited about their baby cousin. We kept discussing this new baby with such exuberance that they can’t say his name without yelling it. Although to be honest, the girls had entered into the stage of being fascinated with electronic devices and the baby monitor used to watch their cousin during naps was enthralling (never mind the baby). 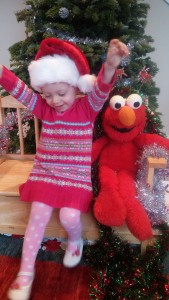 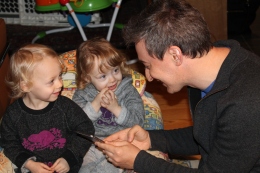 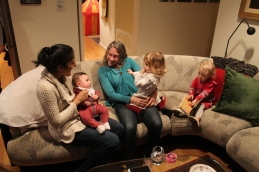 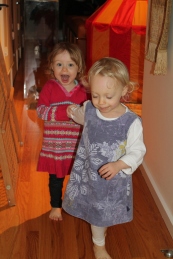 For Christmas Eve and Christmas Day we had the pleasure of hanging out with the Wichmans. We feel very lucky to have had Kat & Tasha meet the their relatives this year. Not to mention we achieved the impossible…a group photo! 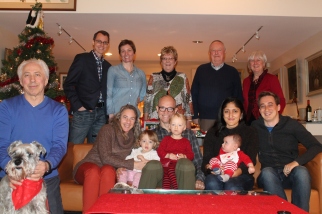 So where are we at now? Well. The girls are definitely two year olds (fast approaching three). They have very strong opinions about toys they should play with, food they should eat, where they and we should sit or stand (“there dada, no, THERE”), and how a blanket should be placed over them when in bed (“flat momma, no, FLAT”). Bedtime now involves one book, saying goodnight to a half dozen animals, and more than a half dozen requests for water. One of their new favorite things is singing. We took them to Benaroya concert hall for a kids Christmas music special and they are still talking about “the lady” (she remains nameless) who sang and played piano and drums. They also learned the words to Twinkle Twinkle Little Star and sing it approximately 249 times a day, especially Tasha who really likes to belt it out like a baritone opera singer. More recently they have ramped up their imaginative play; they enjoy serving up pancakes from their kitchen and changing baby’s diaper (cream and wipes essential).

To end this long post, I will add that I (Lara) am  training for a half marathon in February with a group called Team Challenge. This crazy endeavor is to raise awareness and funds for the Crohn’s & Colitis Foundation of America. Should you have made it this far, please consider reading my story and even making a small donation at:  http://online.ccfa.org/goto/Diener

It’s a meaningful cause for me and the over 1.2 million others affected by this disease (who usually keep really quiet about it).

So meaningful, in fact, Neil jumped into frigid Lake Washington after running 5km the morning of January 1st to help Lara raise money for the CCFA. He is depicted post polar bear plunge in the photo below left. Below right is the CCFA team in training, with Lara in orange hat. This was before running 9 training miles in monsoon rains this past Saturday morning, at which point we were just as sopping wet as Neil. What a start to 2016…we hope you all are staying warmer and drier than us 🙂