The great thing about having two units of measurement is that it doubles the number of full integer milestones the bubs can reach!

Natasha has been growing steadily since the last update and is over 3 pounds now at ~1.4kg. She is definitely getting bigger in length and head size but is also filling out into her skin – when they both came out they were about 12-13 inches long but mostly bone and a lot of skin. It was like the first thing that grows is the outline and the rest is filled in later, which works great in two dimensions but looks a bit, well, saggy, in three. Katarina has had a stop-start growth pattern, depending on how much energy she is putting into breathing and fussing. But she is now 1034g and has put on weight for four of the last five days. She is still on the NAVA but the settings have been slowing trending down-up-down so that she is heading in the right direction. We suspect she will have some medium-term issues – we get different opinions from different staff – with her lungs because she is coming up on 4 weeks of requiring significant breathing assistance. But she is off the ventilator and putting on weight so we are pretty happy about that.

We are becoming veterans of the NICU (neonatal intensive care unit). We go in every afternoon and get to hold either one or both of them. Natasha is always able to be held but for Katarina it depends on how her “desats” have been – these are when her oxygen desaturates, i.e. her dissolved oxygen levels drop below 88%. Sorry for talking shop, but they use a pretty cool dissolved oxygen probe that is basically a (red) light wrapped around one of their feet that shines through and somehow measures their oxygen level. Haven’t got the full details. You can see it on Natasha’s right foot in the video. They also have them connected to a heart and respiratory rate monitor so they are getting real time data on all the key parameters. They also take blood samples daily for blood gas analysis so I know they have a BGA around somewhere but can’t see it anywhere. They also mentioned that if their hematocrit levels drop they might have to give them this drug called EPO. When they told me that I laughed, and said “I sorta make that”. The nurse misunderstood and started explaining what it was. So I told her I worked for Amgen and please let me know if they give to them and I’ll look up the lot number to make sure it’s a good batch. And then I remembered what Lara said about how some people don’t understand my sense of humor and hastily told her I was joking and they are all good batches.

We’ve got to know another mother in our room – there are six beds in our room, two taken up by our girls and another taken up by her girl: even more premature born at ~25 weeks and weighing only 1lb 1oz (~500g) at birth. Geez. The other beds are usually taken up with babies that come and go in a couple of days – usually they just need to be stabilized and monitored. These babies come in and we look at them and think they are absolute behemoths. Then we find out they are 5 pounds and realize we have a different set of criteria for size.

Couple of pictures below. First is a picture of the NICU – Katarina is on the right and Natasha is in the background. 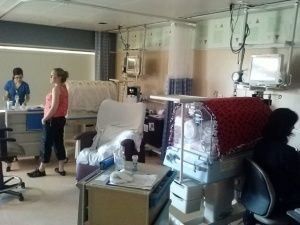 Here is Katarina lying on Lara today. Lara is on the left.

And Natasha sleeping after a hard days…ummm….breathing?